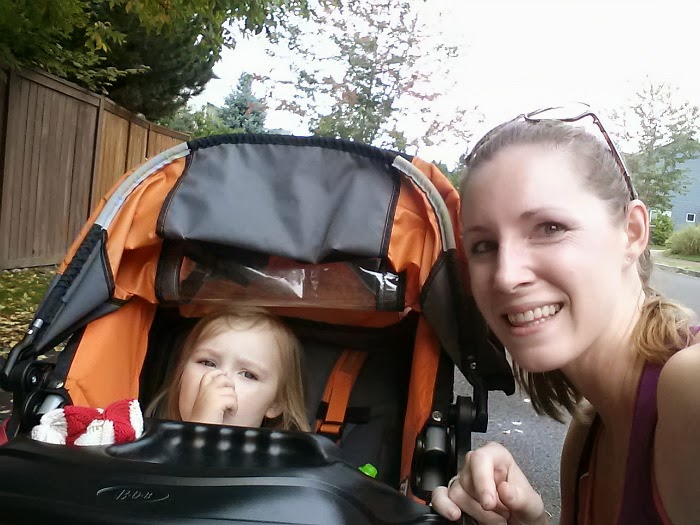 2 weeks down in our half marathon training!  So far I’m feeling really really good.  Not only am I feeling good, I’m seeing some changes in my physique as well (I feel so fancy saying physique, ha!).
My legs are more tone, my abs have a little more definition and even my arms are feeling strong.  Not bad for 2 weeks of running.  I think I’m going to like this running thing.  🙂

Since Huebie was away on business this week I had our sweet little running partner to myself. But man, it is HARD to push a stroller and run.  I’ve done it before, but not as far and not in preparation for a race.  Girlfriend is starting to get heavy and pushing her up the steep hills is a task.  But it’s good training.  I’ll just be that much faster when it’s race day.

I also officially signed us up for our race on December 1st!  We are doing the Seattle Half Marathon!  Super excited…and a little nervous.  It’s real now.  I’ve given them my $$ so no backing out. She loves our runs.  Our short runs that is.

We did our long run on Saturday.  We had a movie, snacks, good weather.  Baby A was set.  She did great until a mile left in the run.  And then she lost it.  I mean, lost it you guys.  She was screaming, kicking, trying to get out.  She was a hot mess.  People were looking at us.  You could hear us coming up the road, practically sprinting to get our last mile done before she wiggled her way out.  That’s when we decided that from here on out she will be staying home on Saturdays with the nanny or one of the grandparents. This is how we ended our cool down.  Alternating between walking, being carried and shoulder rides.  She’s much happier on Daddy’s shoulders.  Little stinker.

Like I said last week, new gear just makes you feel better about running.  So I ordered a few new things last week that came yesterday! The Northern Lights tank and Stability Run shorts from Athleta.  Super excited to break these out later this week when the temps are supposed to be a bit warmer (above 65 degrees).

by Tiffany
previous article: Pinterest Inspired Outfit…and a contest for some unsung heros out there!
next article: Homemade Pumpkin Face Mask