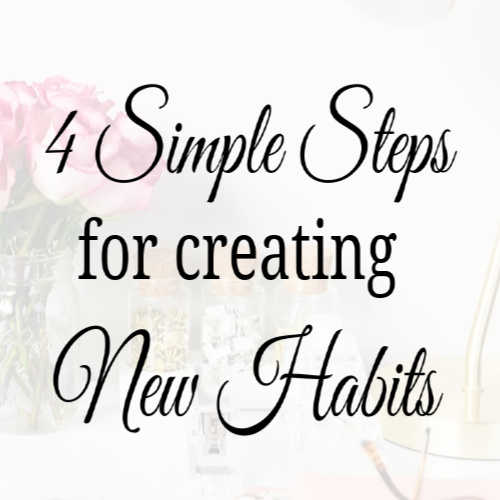 Creating good habits is essential to success.  Here’s how you can learn to harness the power of habit. I’ve written a lot of posts about habits.  How to make working out a habit, habits of successful women, habits that blast belly fat.  Habits are a powerful thing.  Research shows that 95% of what we do is the result of learned habits.  Good, bad or indifferent, habits shape much of what we do in or day to day lives.

Take smoking for example.  Smoking is a bad habit that people learn after repeatedly picking up a cigarette, lighting it and taking a drag.  The reason people have such a hard time quitting is because smoking has become not just an addiction, but a habit for them.  Once formed, bad habits can be hard to break.  But what if we could replace those bad habits with good ones?

In general, it takes 21 days for an action to become a habit.  The key to successfully building good habits is learning how to eradicate those habits that are debilitating, unhealthy, and just plain bad, and replacing them with habits that will help you grow. And you can do that by focusing on routines.

For example, my husband’s nightly and morning routines are now habit for him.  Before bed, he makes his breakfast for the morning (so he just has to heat it up), gets out his coffee mug and packs his meals and protein shakes (he drinks 2 protein shakes and eats 2 meals while at work).  He works out before work, so he lays out his gym clothes and packs his gym bag with his work clothes. He does this so that in the morning, everything is ready to go.  He has zero decisions to make.  He has established patterns for himself that are so routine, that he has no thinking to do.

You see the thing about habits is that they are things you do unconsciously.  You don’t realize you’re doing them until someone points it out.  I used to bite my nails, but I was never aware I was doing it until someone (usually my mom or husband) would point it out.

Same goes for smokers.  I have known a lot of smokers in my life.  And there are some things I’ve noticed.  They smoke when they socialize.  They smoke right after a meal.  They smoke when they get home from work.  These are habits they’ve created around smoking.  It’s something they do unconsciously just like taking a shower or brushing your teeth before bed. So how can we create good habits and get rid of the bad ones?

RELATED  5 Things To Do Every Morning To Stay Healthy

Identify your triggers.
Next, you need to identify your trigger points, or patterns that you’ve created around the habit.  Say you want to quit watching so much television.  When do you turn the TV on? Is it after putting your kids to bed at night that you automatically plop down on the couch and grab the remote?  Or is it after cooking dinner that instead of sitting at the table you sit in front of the TV?  Figure out what triggers the habit.

Decide on a replacement behavior.
Finally, focus on creating new patterns and triggers.  If you want to watch less TV, once you put your kids to bed don’t head to the couch.  Instead go to your room, grab your book off your nightstand and start reading.  If you want to workout more, set a reminder in your phone to pack your gym bag the night before, then set another reminder to go to the gym say Monday, Wednesday and Friday right after work.  If you want to stop hitting snooze on your alarm put your phone on the other side of the room so you have to get out of bed to shut it off.

Be consistent.
Remember I mentioned above that it takes at least 21 days to form a new habit.  Being consistent with your new habit is key to making it, well….a habit.  🙂 If you don’t watch TV before bed for 3 days, don’t reward yourself with a show the 4th night.  You’re more likely to watch TV again the 5th, and 6th, and 7th night.  When this happens you have to start over again and it’s that much harder the second time around.

Before you know it, that old habit will start to be present in your life less and less and your new, good habit will become part of your routine.

Try not to focus on more than one habit at a time.  Instead think about one thing you’d like to change and charge full steam ahead.

If you want to learn more about habits, I highly recommend the book The Power of Habit: Why We Do What We Do in Life and Business by Charles Duhigg.  It is eye opening.

by Tiffany
previous article: 7 Things To Do On Sunday For A Successful Week
next article: For My Babies’ Daddy